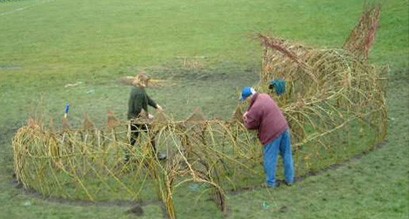 My project was with Amberley First School, Killingworth. The objective was to create a living maze of some description that would enhance the school grounds and provide the pupils with an opportunity to work with natural living material. By using willow it was hoped that the children would be able to explore the connection between man and the environment – how landscapes can be changed by planting and the many uses that can be made of such common natural material. This was the first introduction to willows for most of the children and they readily appreciated the potential of such a useful and easily worked resource.

The initial title for the project was ?Amazing Maze?, this was soon changed to the ?Amberley Dragon? to link in with the children?s current work on Dragons. The whole school had been well primed by Ali Endean and from my first visit I was very impressed by the enthusiasm of the staff and children.

The first day (May 18th) of the project was given over to cutting sufficient material to make a willow sculpture. It was originally hoped that the children would be able to help with this task but we were unable to locate suitable material in the area. Because of this I spent the day cutting willow at the river Esk in Dumfriesshire which I had to supplement with willow provided by Carlisle City Council. In retrospect I think that locating, harvesting and transporting the willow was by far the most problematic part of the whole project and used up the time and energy of three adults for two days. However it was all worthwhile on hearing of the enthusiasm of the children when helping to unload the willows.

On May 19th 1 had my first session with the children. I explained about all the many uses of willow (charcoal, baskets, building, natural habitats etc) and passed around baskets and necklaces made from willow. They also looked at photos of baskets and told me how baskets were used in their own homes. We then looked at the material that we would be using the following week, bow straight it was and how bendy. I explained the coppice cycle, that the ?sticks? that we were going to use had taken a year to grow and were a crop that could be harvested every year. We also had a walk around the school grounds to identify any willows growing nearby so that the children could relate the harvested rods to living trees. In the afternoon I gave the children a slide presentation where they saw their first examples of living willow sculpture as well as osier beds and willows growing in natural habitats beside rivers. The children the had a session with their teachers discussing and designing the shape that their sculpture would take.
The following week was devoted to building the Amberley Dragon to a design that was arrived at after looking at the drawings made by the children. The outline of the dragon was made by two classes positioning themselves in the required shape on the playing field and each child planting a short stick to mark their spot. We then passed a ball of string around so that the string could be looped around each stick to give us the shape of the dragons body.

With the help of one of the dads I then cut a narrow trench so that the outline would show up clearly. The trench was also useful for watering the willows and ensuring that the water was directed where it was needed – at the base of the willow rods. The next task was to plant the 8-10 foot willow rods ready for weaving the skeleton of the dragon. Planting holes were made with sledgehammers and crowbars by myself and my dad helper and the children planted the willows. As we were carrying out this work I explained that the rods were living plant material and would need a lot of help to grow, the children would have to look after their rods and water then carefully and look out for new growth. Once all the rods were planted they were woven together to form arches and this was when the dragon began to tak6shape. The rest of the week was taken up with filling in the skeleton by weaving smaller rods along the sides of the arches. This was done with great pride and enthusiasm. Some children became water carriers and carefully watered the planted rods. When we began to run short of suitable weaving material the school arranged to cut some more willow that I had spotted growing at the local high school and so some of the children were actually able help me select and harvest willow. They reported back to their classes and proudly displayed their crop.

The dragon was completed on Friday and we were visited by the North Tyneside Herald and Post for a photo. During the afternoon the whole school came outside for an opening ceremony and danced around their dragon.

I think that the project worked very well for two reasons – the enthusiasm of Ali Endean and the children, and the timescale (concentrating the work into just over a week of continuous activity). Ali?s goodwill and enthusiasm ensured that the children enjoyed every aspect of the project. I also think that
being with the children every day meant that their interest was not diluted by other activities and that they were keen to come to school to see what would happen each day. It was also very good for
developing a working relationship with the children (?team building? in adult terms, I suppose). I was also pleased to see parents becoming involved as the work progressed, about half a dozen parents came and helped. One father who initially didn?t know a willow from a hole in the ground actually went out on several evenings and cut willows to bring to school the next day. Another important aspect of the project was the sense of shared ownership that the children developed as they worked on the project, hopefully this will ensure that the dragon is well looked after. The poems and stories that have been stimulated by the work has also been very gratifying, and I have had some very nice letters and drawings sent to me from the school.

I think that the children gained some valuable environmental awareness from the project and learnt something about man?s use of natural resources as well as care and cultivation of plants. The school seems to have enjoyed the project immensely and they had developed a dance and adopted the dragon as the school emblem. I hope that this project is the first of many that Amberley First School take part in – they have the space and the energy for many more.